Controversial report wants to undermine the "One of Us" Initiative. Urgent action needed!

The European Citizenship Initiative “One of Us” has now reached already 1,3 Mio signatures in Europe and fulfils all criteria to be considered by the European Commission (www.oneofus.eu).

In a recent attempt to neutralize One of Us before it gets submitted in November, a Report is due to be voted at in the European Parliament next Monday. Below you find some significant quotes from this document presented by the Portuguese socialist MEP Ms. Estrela.

This report promotes abortion as a fundamental right, attacks the right to conscientious objection and the rights of parents and calls on the European Union to fund abortion in its Foreign and Development Aid Policy. This text wants more abortions and less rights for conscientious objectors and parents, it recommends nothing in relation to the prevention of abortion or support for pregnant women. It is a striking example of old-style feminism and has nothing to do with modern politics in which space for life and all people, including children, must be sought.

Email ThisBlogThis!Share to TwitterShare to FacebookShare to Pinterest
Labels: abortion, estrella report, European Citizens Initiative, one of us

Speakers at the Catholic Conference “European Encounters” assaulted by activists 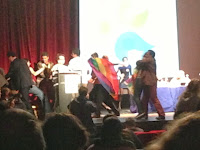 From 11 till 13 October, I participated in the “European Encounters” conference that took place in Brussels. This conference had as main target to equip young Catholic Christians to implement their faith in their daily life and profession.

When Christine Boutin started her speech about the Soul of Europe, suddenly a group topless feminist-gay activists with a big rainbow flag ran in front to the members of the panel and wrapped the flag around Ms. Boutin and kissed her on her head and cheeks. Other members of the group sprayed whipped cream on the faces of the Archbishop and on Father Nicholas.

Fortunately, people came to remove these protesters from the podium. After a break where the mess was cleaned and the panel members could take a breather, Christine Boutin continued her presentation about the basic European values of solidarity and peace.

Read here my article
Read more »
Posted by Leo van Doesburg at 4:55 AM No comments:

The European Citizens' Initiative (ECI) "One of Us" to protect and respect the dignity and integrity of the human embryo is seriously undermined by the opposition who is working on its counter-offensive by an own initiative report  on sexual and reproductive rights. It has already been adopted by the Committee on Women’s Rights and Gender Equality on September 18. Rapporteur Edite Estrela — a member of the Progressive Alliance of Socialists and Democrats group in the European Parliament — argued strongly in favour of legalizing abortion in all European Member States with no consideration for the fundamental rights to life and conscience recognized by the EU.

This issue should be taken very seriously and we should do our utmost to put this under the attention in media and MEPs. The aim of this own-initiative report is to neutralise the ECI by a "zero sum game" where nobody really wins. If this resolution passes in Plenary, the EU institutions have an alibi to avoid any further action on the ECI. The vote for a resolution is expected to be at 22 October.

The pro-abortion lobby is very clear on this issue and the motion for a resolution will include the following statements:
The final report as adopted in the committee will be released on Tuesday 15 October. The vote is to be expected on 22 October in the European Parliament

More information you find here or on the website of the European Dignity Watch
Read more »
Posted by Leo van Doesburg at 4:10 PM No comments:

Email ThisBlogThis!Share to TwitterShare to FacebookShare to Pinterest
Labels: abortion, Estrela, freedom of conscience, one of us, sexual and reproductive rights

European Court of Human Rights: The Grand Chamber to rule on a right to assisted suicide

STRASBOURG, France — The Grand Chamber of the European Court of Human Rights has agreed to hear an appeal in a lawsuit filed against the Swiss government after authorities there would not provide a woman who does not suffer from any fatal disease with drugs to commit suicide. An ECHR panel ruled 4-3 in May of this year that Switzerland’s law banning lethal poison in such circumstances violates Article 8 of the European Convention on Human Rights (right to respect for private and family life) because the court considered the law vague.

“The government has an obligation to protect life, not facilitate death,” said Legal Counsel Paul Coleman. “Claims to personal autonomy do not override national laws designed to protect the weak and vulnerable. We trust the Grand Chamber will support this principle, which is entirely consistent with the European Convention on Human Rights.” 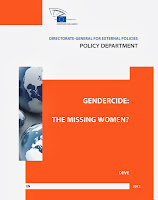 On 8 October, the European Parliament will vote on the important report: "Gendercide: the missing women" of the Committee on Women's Rights and Gender Equality" by rapporteur: Antigoni Papadopoulou. Gendercide is a global issue of concern everywhere pregnant women, on purpose or under pressure, decide not to give birth to girl foetuses.

Read here a study of the European Parliament on "Gendercide: Missing Women"


Although the Papadopoulou report has many positive aspects, five important amendments were tabled by Anna Záborská, Christa Klaß, Teresa Jiménez-Becerril Barrio, Gay Mitchell, José Ignacio Salafranca Sánchez-Neyra, Peter van Dalen and 82 other MEP’s. The five amendments give a clearer stance on the ‘human right to conscientious objection’ and one of the amendments explicitly recalls the Declaration of the Rights of the Child, whereby every child, regardless of sex, has the right to appropriate legal protection before as well as after birth.’’

The five amendments are a much needed addition to the Papadopoulou report and therefore ECPM calls on all MEP’s to support these amendments
Read more »
Posted by Leo van Doesburg at 8:51 PM No comments: