Symposium From Theory to Practice, 3 October Palace of Parliament 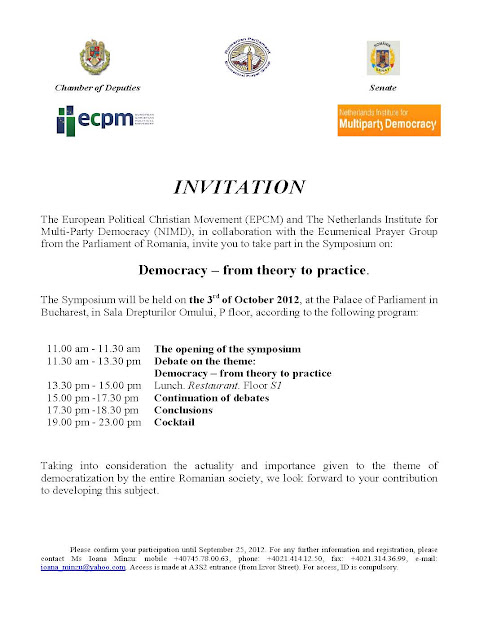 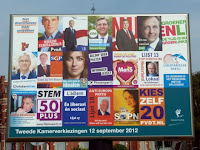 A few weeks before yesterday's elections for the Lower House of the Dutch Parliament (officially the Second Chamber of the General Estates) it had seemed as if the race for becoming the largest party was between the rightwing liberal VVD and the left wing populist Socialist Party. In those final weeks the leader of the Labour party (PvdA) performed better than the leader of the Socialist Party in televised debates though. Thus it soon became appearant that the race would be between VVD and PvdA and the media of course focussed on this as well.

The ECPM urges Dutch Christian voters to vote tomorrow (12 September) for a Christian party in order to preserve the freedom of faith & conscience in a more and more aggressive-secular environment. Please read the statement here.

Remarkably, the party leader of one of the Christian parties, the ChristianUnion got also support of the British Prime Minister Cameron yesterday. Cameron explained: ,,My Party works hand in hand with the ChristianUnion in the European Parliament to achieve a more efficient, less interfering Europe that is committed to peace, security and trade. Arie Slob has shown a real determination to play a key part in leading the Netherlands through the current crisis. Like him, I want a strong society in which families, associations and faith-based communities can show what people can achieve when they work together to build a better country. He has a great contribution to make."
Tomorrow, 12 September, the elections for the Dutch House of Representatives will take place. For the moment, the two member parties of the ECPM: the ChristianUnion and the Dutch Reformed Party (SGP) occupy 5 and 2 seats in the House of Representatives on a total of 150 seats. We hope and pray that their number of seats will increase. In the period 2007-2010, the ChristianUnion took (together with the Dutch Labor Party and the Christian Democratic Appeal) part in the Governmental Coalition. Recent polls show that it's a neck-on-neck race between the Liberal Party (VVD) and the Social-Democratic Labor Party (PvdA) as to who will become the largest party in the Netherlands.
Read more »
Posted by Leo van Doesburg at 5:31 PM No comments:

Adress at the Roma Culture Days

On the 1st-2nd September I participated in the Roma Culture Days, that took place in Sibiu (Romania). This festival was organized by the Christian Roma Center. During these days, a special fair was organized, where traditional Roma craftsmen showed and sold their products. During the fair different (Christian) Roma artists performed in an extensive cultural program. At the opening, I was given the opportunity to address the audience. At the end of the Festival, Florin Cioaba, President of the Christian Roma Center called on the multitude to fight against discrimination between Roma and Romanians and to stretch out to each other the hand of peace, thus respecting  European, democratic and Christian values.

Following the Festival, I took part in the meeting with the Presidium of the International Romani Union. Please find below the official address I delivered at the Union on behalf of ECPM

Four British Christians who claim they lost their jobs as a result of discrimination against their beliefs are taking their cases to the European Court of Human Rights (ECtHR). They include an airline worker stopped from wearing a cross and a counsellor who refused to deal with gay couples.

All four lost separate employment tribunals relating to their beliefs.Secular critics have said any ruling in favour of the group could "seriously undermine" UK equality law. A ruling is not expected from the ECtHR for several weeks.

Please read here the whole article and more information about the cases, find the article from the BBC here )
Read more »
Posted by Leo van Doesburg at 7:22 PM No comments:

On the 28th of August, the 1st Moldovan Parliamentarian Prayer Breakfast took place. In total, 10 Members of the Parliament of Moldova from 3 different parties participated (the Moldovan parliament has 101 MPs) as well as an MP from Canada and representatives from the Canadian Christian Embassy. I addressed the participants on be half of the ECPM and expressed the importance of parliamentary prayer groups all over Europe (see my message here) and read a message from the Ecumenical Prayer Group from the Romanian Parliament addressed to the participants of the 1st Moldovan Prayer Group. It was a good and friendly atmosphere with personal messages based on the love of Jesus and the Holy Scriptures. It was encouraging to see the open and personal message also of the participants and to see that the principles of Jesus unites politicians of different parties. I was impressed by MP Valeriu Ghilețchi (Moldovan MP and member of the Parliamentary Assembly of the Council of Europe) who organized and chaired this important event. At the end all the MPs present agreed to meet each other regularly as a prayer group in the Moldovan Parliament. Also touching was that today, one day after the celebration of the 21s anniversary of the independence of the Republic of Moldova, the former president of the parliament who signed this declaration explained the importance of values like human dignity as the basis for society and politics.

Please read my address on behalf of the ECPM below