Belarus: the battle for recognition, a battle for freedom (part 3, final)

In the afternoon, a number of interesting questions were discussed and voted on. First there was the question of whether the party should participate in the local elections in 2010. These elections would most probably not be held honestly. Would it not be better just to boycott the elections? Finally people voted for the option to participate in the elections. There should be a signal given to the people that an opposition and therefore alternatives exist. Also the campaigns could be used to spread the messages of the party and to make the party better known in Belarus. 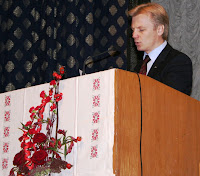 The convention was ended in prayer, followed by praying together “The Lord’s Prayer”. For the young people the congress was followed by a concert of contemporary Christian music.

A new step has been taken. In total 643 participants were registered for this congress: 311 delegates and 332 guests. Considering all the problems with the preparations, this was a good number, even more than in February. It is again a new beginning and we will see what the Belarusian authorities will do. 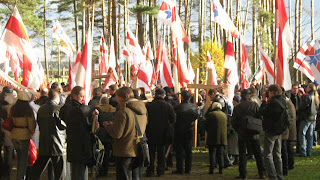 The next day I took part in the annual procession for the victims of the communist regime. The whole opposition was there with their flags, banners and the forbidden red and white flags. A whole group of young and old people walked from the city to the mass grave on the outskirts. The whole escort drew the attention of KGB in plain clothes who took pictures of everyone joining the procession and who filmed it all. A woman told me that she was glad that I participated in the procession. This is probably why the police was so quiet and did not interfere in this year’s procession.

Slowly people were walking through the outskirts of the city to the forest where hundreds of thousands people were killed and buried and which is situated now directly next to the new ring road. People walked slowly and quietly, with an occasional loud cry of “Long Live Belarus.” Slowly walking, thinking about the victims: praying and hoping for a change in society and a freedom that does not seem to come and for an end to a life of fear which has lasted 70 years under a repressive regime. 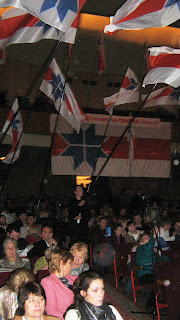 It was very busy in the hall of the conference centre as people were being registered. The organizers worked very hard throughout the night to finish everything in time and the conference room was decorated well for the congress. At 10:30 a.m. the congress was officially opened with the announcement that despite the fact that people were stopped on their way by the police (here called “militia”), and the presence of police and army at the square, the congress could take place, now 18 years after the independence of Belarus. This was followed with a loud “Long live Belarus”. This slogan was repeated throughout the congress

After the opening prayer and practical and statutory matters, important persons gave their greetings. The first greeting, given by Stanislau Shushkievich, was remarkable. He was the one who signed, together with Boris Yeltsin and Leanid Crauchuk, the document for the dismantling of the Soviet Union in 1991. He was also the first prime minister of the independent Belarus. He was impressed by the BCD, especially because the party is comprised of honest Christian people, mostly young, who are inspired to put Christian values into practice. Also members of other opposition parties gave their support to the BCD in their striving for freedom and democracy. 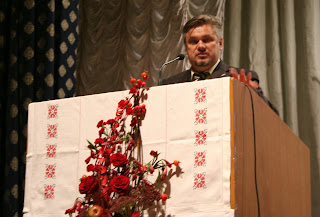 The official greetings were followed by the leaders of the party who explained their vision and development of the party. It was clear that the party based their Christian values on the Word of God. George Dmitruk, vice chairman of the BCD, explained that “we must not forget to witness about the love of Jesus also in politics and that we should follow His example in this. We have to honor Him in all the work we are doing and we should be united by God’s love and power and to raise Gods flag in everything we do.” Also he mentioned that one of the strong points of the BCD was that they did not want only to improve living standards, but also that they want to focus on the implementation of Christian values in society.

Regarding the growth of the BCD, Dmitruk used the strategy of Jesus. He trained 12 disciples and sent them into the world: the party also needs to prepare people and to send them to reach more people. Everyone should prepare their twelve people. 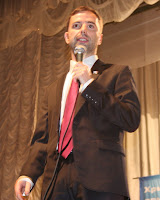 Aleksei Shein, also co-chairman of the BCD, focused his speech more on the sorrows in Belarusian society. The country is in the top 10 of the number of abortions, divorces and suicides. The BCD should do everything to be in the frontline and to make people aware of these problems and to change these situations. Although they do not have the illusion that elections will be honest, it is important to spread these messages during the election campaigns and to make people aware of the problems in society.

Pavel Seviarynets, chairman of the party, talked about the growth of the BCD. At the moment, the BCD has 1,800 members from 108 different cities and villages. Despite repression and intimidation, every month new people become members. Now the party has its own newspaper, website, CDs with Christian music and also a club for Christian writers. In addition to this they organize special training for young activists who want to become members of the party. He stated that this was thanks to God for everything that had been accomplished, because nothing could be done outside His Blessings. He also talked about human dignity; protection of the deprived by faith or religion and the protection of life as important points for the party. 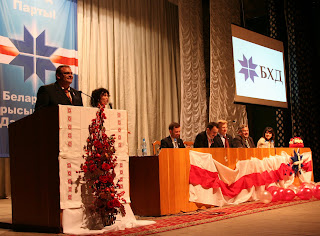 When the speeches of various guests, such as representatives of different churches, were finished, I was invited to share some brief thoughts. I started with the question ‘How it is possible to organize a second ‘founding congress’? Theoretically this sounds very strange: the normal way should be a single founding congress: the party was founded or not. The conclusion was that the party was founded, but not registered. The better name should therefore be: “the second registration congress.” I also spoke about the importance of Christian values in politics. “I do not believe that faith is simply an individual matter, but that the Christian faith is fundamental for the development of society and for the formation of the character of the European continent we live in”. I also tried to show that they were not alone in their battle for freedom, but that we are with them and that this was not only a matter for Belarus, but also for Europe and for the future of the European Union which we hope Belarus will one day be part of.

After lunch, practical and statutory matters that were required for the legal registration of the party were taken care of, followed by enthusiastic reports of representatives of different regions in Belarus about their work in difficult circumstances.

(To be continued)
Posted by Leo van Doesburg at 9:40 PM No comments: 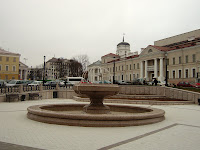 Minsk is a big, clean city, well lit and beautiful, with impressive buildings: a pleasant city to live in. On the other hand you see posters with militaristic, communist symbols on these big buildings. In front of the “parliament” building there is a big statue of Lenin. If you travel further, you will pass a big yellow building: the headquarters of the Belarusian secret service, still called the KGB here.Further, crossing the river you will see a kind of barn. This is the place where Lenin held his first communist congress in 1898. 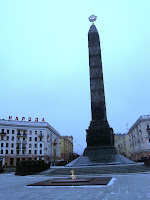 When you walk further, you will arrive at the Victory Square where a monument with an eternal flame to remember the victims of the Second World War when also many people were killed and 80% of the houses were destroyed.If you go further and leave the city, you will find one of the mass graves where hundreds of thousands of people were killed by this same communist regime. Every year, on the second Sunday in November, a procession is held to remember the victims of this regime. The communist regime still keeps the country in its iron fist through the ruling president Alexander Lukashenka. 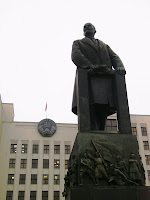 In 2004 the president tried to destroy the area to create a new ring road around Minsk but protesters opposed these plans. Belarus is called the last dictatorship in Europe, where people can be persecuted if they organize religious activities outside the official religious institutions and churches, and where priests and pastors were expelled from the country and churches forced to sell their buildings for ridiculously cheap prices. But it is also the country of beautiful buildings and castles, clean cities, friendly people and where Western fast foods and companies are opening up. Minsk is a city with a turbulent past, a difficult present, but (as we hope and pray) with a better future. 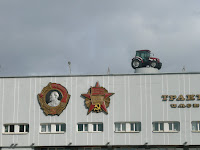 However, the authorities refused the permission needed to hire any location in the city which would have made it almost impossible for the party to organize the congress. But when the leadership of the BCD declared that they would organize the congress on the big Kastrychnitskaya square in Minsk if they did not receive permission, they were finally allowed to sign a contract one day before the planned congress on 30 October. The congress could be held at the same location as the first founding congress: in the conference room of the Minsk Tractor Factory.

However, when representatives of the party in the morning of the 31st went to the square to invite the people who did not know that the congress would take place in the Tractor Factory, they found police cars, military and police on motorcycles circling the square, trying to stop the people. It was therefore good that the congress did not take place on the square, especially since the Ministry of Internal Affairs announced via the website Interfax that people would be arrested if the congress took place on the square.

(to be continued)
Posted by Leo van Doesburg at 2:51 AM No comments: